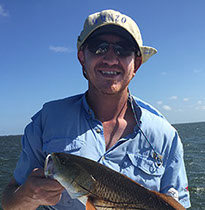 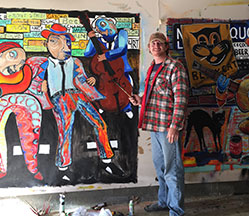 Rob Gonzo, (aka. Robert Wolverton, Jr) is an Outsider Artist living in Memphis, Tennessee. Over the past 20 years, he has supported himself working odd jobs that included chinking log cabins and restoring buildings on the Natchez Trace Parkway, restoring historic buildings in downtown Memphis, beer truck deliveries to Juke Joints and country stores in the Mississippi delta, digging ginseng and yellow root in Mt. Pleasant, picking, restaurants, and some film acting.

Having been drawn to art at the age of 6, Rob continued to follow that rising passion, studying famous painters on his own while experimenting with various materials and techniques in a makeshift studio.   He tried art school, but dropped out after a couple of weeks.

His art career followed the path of typical Outsider Artists where he was giving his paintings away to interested fans, or selling them for $50 or less. Also typical was Rob’s zeal for creating art.  He was turning out hundreds and hundreds of paintings. 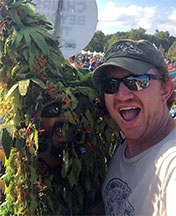 That path changed when Rob’s style began to take on a more evolved look around 2016.  A broader, more seasoned group of art collectors began paying attention to his art using two strong reference points...Jean-Michel Basquait and Pablo Picasso.  Rob was suddenly shipping art to New York, London and Los Angeles appealing to, among others, young film producers and directors who recognized the uniqueness and greater value in his paintings.

His odd jobs have dropped to the wayside as he is now dedicating full time to his art, focusing more on quality and details rather than on quantity.

Rob’s art is considered to be a mix of styles including: contemporary, abstract, folk art, neo-expressionism, street art and graffiti. He uses material such as fabrics, cardboard, and other found objects to build up texture, dimension and create stories. During his picking days, he gathered a lot of ephemera dating back to the early 1900s that he also uses as small touches of collage.

He has graduated from his early folk art days where he would paint on almost anything that would stay still long enough.  Now Rob prefers canvas, but still paints both large and small images on board. He likes to use bright vivid colors, sometimes straight from the tube.

Rob has recently connected with one of his hometown heroes, nationally acclaimed artist George Hunt.  The two have recently completed a couple of “Shared Spaces” paintings together.  Hunt, like Rob, has been heavily influenced by Picasso and Basquiat and he shares Rob’s regular use of  interesting and unique collage materials.

Some of Rob's inspiration also comes from old-school folk artists like Howard Finster and George Widener, but a major inspiration in his work comes from pre-war and post-war blues music and blues musicians.  You will see this in many of his works...following George Hunt’s trailblazing paintings of blues greats like Muddy Waters and Robert Johnson. 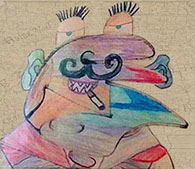