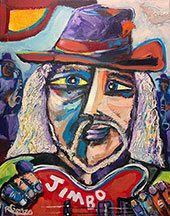 Rob Gonzo art is available at two LongRiver co-branded galleries in Memphis.  Working with other businesses who have 6 and 7 day-a-week staff in place allows us to make Rob Gonzo's art available whenever buyers are interested.  Both of the businesses we are partnered with have a long history of success and are considered tops in their own catagories.

When Danny Bubnick opened Midtown Framer & Art in the fall of 2009, LongRiver Entertainment Group partnered with the company to establish a fine art gallery in the large space in front...along Union Avenue.

with a group of his original paintings along with high quality

When Brother Junipers famous breakfast restaurant expanded in the fall of 2008, LongRiver Entertainment Group partnered with the owners to establish a fine art gallery in the new, large waiting area next to the restaurant.

The gallery opened with a showing of Rob Gonzo's original work

purchased in the Gallery.

.......just off Highland near Univeristy of Memphis